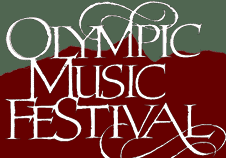 Started in 1984 by ex-Philadelphia String Quartet member Alan Iglitzin, the Olympic Music Festival was originally intended to be the summer home for the Philadelphia String Quartet, who had come to Seattle in 1966 as the University of Washington’s Quartet-in-Residence. Attendance of these first summer concerts, however, made it clear just how hungry Northwest audiences were for the combination of the setting and music. END_OF_DOCUMENT_TOKEN_TO_BE_REPLACED